For the Ad-free version of guitar-list.com  log in as a user - its free! 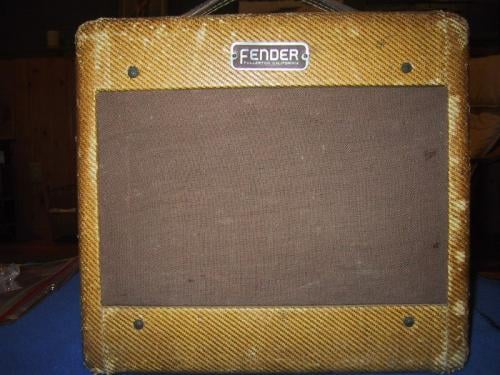 The Champ model used the most primitive design for a Fender amp. It was intended as a budget amplifier for students and begirners, and the typical Champ uses a single 6V6GT or 6L6GC power tube. It has a single-ended power stage with a large amount of second-harmonic distortion. This gives the Champ a sound often described as "soft" and "lush." The Champ's small and cheap output transformer saturates easily and gives a poor low-frequency response. Early Chanps used 6V6GTs, were extremely primitive, with no feedback, while later models have more complex circuits with loop feedback.

In spite of their crudeness these early Champs are now very collectable, with a design has been much copied by others. The Champ's sound is a rock-n-roll standard, typical of many low-cost amps used in those early recordings.

The first Champ was introduced in 1948 and the series was discontinued in 1982 (although an updated version was introduced in 2006 as part of the "Vintage Modified" line). Most tweed and all blackface amps are easy to date, but silverface amps are more difficult. If the amplifier still has the original speaker there should be a code, usually six digits, stamped on it. You should be able to roughly date your amp using this code.