Transferring wire from the reel to the bobbins requires the coordination of rotational and translational motions, The layer winding movements are performed through either coil rotation (spindle winding) or wire rotation (fly winding).

Spindle winding
In spindle winding, the bobbin is rotated as the wire passes over or through a wire guide that traverses back and forth in the direction of the axis of rotation.

For most applications, both fly or spindle winding produce coils of equal quality. Spindle winding lends itself to coils sensitive to twisting the material or coils of extremely large size or numbers of turns. Fly winding lends itself to coils where there is a lot of work that needs to be done on the unfinished coil before it can be released from the machine.

Another consideration is the desired winding pattern, as this affects the mechanics of the machine. Most ideas about winding patterns for machine wound coils come from the manufacturers of motor or solenoid coils. Traditionally guitar pickups have been hand wound (with acceptable results) and the reguality of the winding pattern is probably not an important consideration. Consistency is desirable, if you stumble across a good sounding design you want to be able to reproduce it reliably. 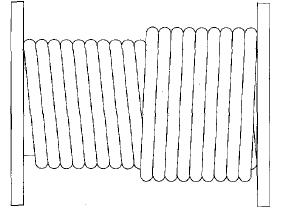 Helical winding
To produce helical winding the wire traverses across the bobbin smoothly as the bobbin rotates. With each rotation of the coil, the wire criss-crosses the layer below, as consecutive layers have opposite helical lay. The resulting effect is like trying to force a left handed-thread nut onto a right-hand thread screw. The wire tries to follow the groove between two turns beneath it, but that groove is slanted in the opposite direction, and before one full turn is completed, pressure from preceding turns forces the wire to jump to the adjacent groove. This process repeats for every turn of every layer after the first one.The wire is should be plastic enough to lie on top of the previous layer as if it were flat. If each successive layer rests directly on the turns of the layer below it, copper density would be around 79 percent. This compares with copper density of approximatly 84 percent for a more or less random winding pattern. 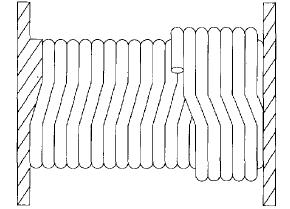 Perfect layer (orthocyclic) winding
The bobbin rotates laying the wires parallel to one another and there is only a small traverse during rotations (this appears as the kink in the wire in the picture). For most of the rotation the traverse mechanism is stationary. This requires precision control over the movement of the bobbin and traversing mechanism. The key to a successful perfect layer winding is in positively securing the turns of the first layer in position, so that the second and succeeding layers have a form foundation to wind upon. The bobbin might require the application of an adhesive to the winding surface to supply the necessary friction for the first layer. Another alternative is to cut (or mold) grooves into the bobbin so that the first winding  of copper wire to creates a base for the initial stages of winding. In theory perfect layer winding yields a higher copper density than any other method, approaching a theoretical 91 percent for a large number of turns. It allows for a smaller coil size for a given number of turns, with less microphonic feedback . Perfect layer winding, however, may ultimately prove too difficult to achieve in practice in a home made machine and might not contribute to the sound of the pickup. 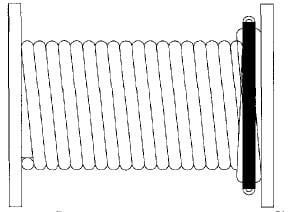 Irregularities
Irregularities in the wire or the bobbin will mean succesive layer’s transitionscould be in different locations. Under these conditions, the wire applies a ”crossed turn”. Winding additional layers propagates this inconsistency from layer to layer, ultimately creating a randomly wound pattern. For the purposes of guitar pickups, howere, this probably acceptable. The position of the start lead (where the wire first enters the coil) prevents a perfect helical path by producing small bump which will propage through sucessive layers. If attempting perfect layer winding the start wire should enter the coil through a slot in the bobbin flange, or a groove milled into the end plate, positioned so as to cause a minimum disruption of the winding pattern. Ideally the start wire should enter at a transition point, and at the same angle the wire makes when jumping from one groove to the next.

What is wire tension?
Tension is the force required to pull the pickup wire against the accumulation of all resistance, forces and loads imposed on the wire as it moves, including any tension device. The forces imposed by the wire path before and after the tension device can be called pretension and are caused mostly by the friction of the wire moving over eyelets, pulleys, supply spool flange, etc. controlling the wire path from the supply spool to the pickup coil being wound.

Why is it important?
Tension is necessary to give the winding machine maximum control of the wire. Excessive tension can become a problem, though, if it damages the wire or its insulation. Damage to the insulation, scuffing scraping, cracking, can reduce its dielectric properties. Too much tension can stretch the wire reducing the diameter which reduces its strength making it more susceptible to breakage. Excessive tension or spikes in the tension can exceed the tensile strength of the wire and break it causing frequent machine stops and inefficient production. Resistance is a major characteristic of pickup coils and often a measurement equated to a pickup's performance and used for quality-control checks. Stretching the wire reduces the diameter and thus increases the resistance even if the stretch is only at one point. Tension controls the tightness or compactness of the coil. Coils with the same number of turns that are randomly wound have different wire lengths. If a coil is wound with good tension it is compact and it has less wire on it then a coil wound with incorrect low tension that results in a coil with longer total length of wire. The coil with the shorter wire has the lower resistance and the coil with the longer length of wire the higher resistance.

Optimal tension
The basic factor determining the optimal tension is the wire size. Industry standards have been established by National Electrical Manufacturers Association (NEMA) and wire manufacturers that provide recommended wire tension for each wire size related to the tensile strength. However, this” wire” tension is not necessarily winding tension. Optimal winding tension includes other factors such as bobbin size, bobbin shape, number of turns, winding speeds, as well as acceleration and deceleration rates.

Varying tension
Tensioning devices must be able to react to the various conditions that can occur when winding pickup coils. The shape of the bobbin is important. A round bobbin is the simplest to wind because the round shape creates an even pull on the wire path.  The rectangular or elongated bobbins used for guitar pickups impose tension spikes during each revolution which the tension device must absorb and maintain control. An exaggerated rectangular bobbin can make it difficult to maintain good tension control with the difficulty increasing as the difference between the long and short side increase. Winding speed is typically limited and becomes a very critical factor.

Tensioning mechanisms
Commercial mechanical tension devices typically use a friction clutch assembly. They are usually manually adjusted by increasing the spring pressure on two disc with abrasive surfaces. Many home-made pickup winding machines have succesfully used two adjustable felt pads which can be tightened against each other to produce friction as the wire passes between them. Since the tension results from the friction of the felt pad against the wire, operation of these devices causes the pads to wear and periodic adjustment is required.

In addition many tensioning mechanisms use a take-up arm or lever (a dancer arm). A take up arm is a lever mechanism with one end mounted to the tension device and the other end extending up on an angle and it has an eyelet or roller at the end for the wire to pass through and continue to the wire guide and on to the bobbin coil The upper most point of travel of the arm is the home position and the forces imposed as the wire goes over the roller or eyelet pull the arm down. Spring pressure pulls the take up arm  toward the upper position so when any slack is created the arm moves upward and takes up the slack. The take up arm typically has it own adjustment and needs only to apply sufficient force to pull back the wire and eliminate the slack. Tension devices can include a sensor to detect wire breaks, end of spool condition or excessive tension.