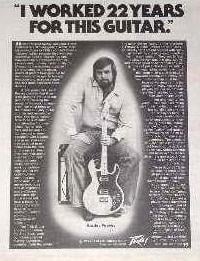 The Peavey T series guitars were originally designed by Chip Todd
in 1977. They appeared in public for the first time at the 1978 NAMM show, (the the T-60 and T-30 guitars, and a T-40 bass). They T-series were historically important because they were the first large scale production guitar made by computerized carving machines.

Competing manufacturers derided the use of CNC machines at the time, but soon adopted the technology themselves out of economic necessity. The advert for the T-60 shows Hartley Peavey sitting on an amp holding a T-60. With this guitar Peavey revolutionised guitar making