Although solid-state technology dominates modern electronics, vacuum tubes are important in guitar amplifiers representing millions of dollars in annual sales.While solid-state amplifiers create a more faithful reproduction of the signal from the guitar's pickups, players tend to prefer the tone of valve amplifers. The human perception of guitar tone is complex and not fully understood: guitar gear designers don't know exactly what engineering measurements are appropriate to evaluating the performance of their creations. A small amount of some kinds of distortion may sound worse to the ear than larger amounts of other kinds, so the only way to evalutate guitar gear is by listening to it.

The preference for tube amps could be due to prior listening experience. The developing guitarist will listen to countless music recordings, most featuring tube amplifiers, and their brain assimilates these audio experiences to form their "ideal" guitar sound. This cannot be the whole story, however, as there is a wide range of musical genres that favour tube-amp tones: from clean rock-n-roll tones to heavily distorted metal genres. Is there something in the tube amp sound that just makes it sound better?

Stephen Bussey and Robert Haigler of CBS-Fender set out to investigate the tube versus solid state sound. In their 1981 paper, Bussey and Haigler describe their experiments to compare the tube and solid state guitar amplifiers. They observed that " the amplifier becomes part of the musical instrument, and is frequently used to radically alter the signal from the guitar. Thus the question of accuracy in the amplification becomes irrelevant, and the choice of one amp over another is left to purely subjective evaluations of the sound quality. Adjectives such as thin, "hollow" or "metallic" have been used to describe transistor amps, while tube amps have been described as "warm", "rounder" or "punchier"."

They compared a Fender Twin reverb tube amplifier with a soild-state amp (consisting of a commercially available power amp with a custom made preamp). This comparison could be criticised, as the solid state amp was not a recognised model, perhaps they should have used something like a Roland Jazz chorus to give a fairer comparison. 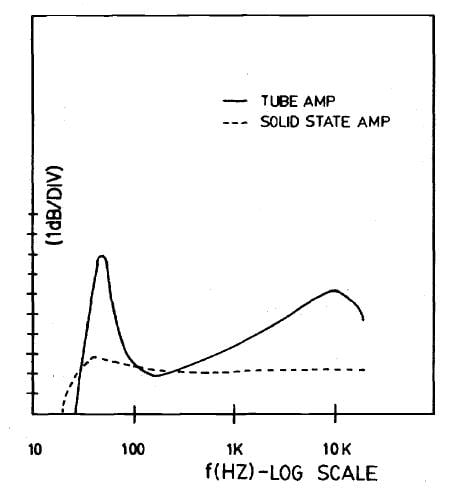 First they measured the gain and frequency response of the amps using a spectrum analyzer. The power amplification sections were done first, with each amp operating into a four ohm resistive load. It was soon clear that the response of the tube amp changed dramatically when connected to a four ohm speaker load (see picture). This did not occur with the transistor amp. This effect is caused by the reactive speaker impedance and the output impedance of the amplifiers. The transistor amp had an output impedance of less than a tenth of an ohm, whereas the tube amp has an output impedance of above five ohms. Thus the output of the tube amp increased as the speaker impedance increases. A frequency response difference this large could easily heard and this was one audible difference between the tube and solid state amplifiers.

You can see from the graph the relatively flat frequency response of the solid-state amplifier. This would provide a relatively faithful (Hi-Fi) reproduction of its input signal. The tube amp, however, is operating like a band-pass filter, attenuating frequencies around 100 Hz. Human sensitivity to loudness also follows a similar bandpass function, although it is centered around 1000 Hz.

For the remaining experiements they removed this effect so that it did not mask other, more subtle, differences. They used a third octave equalizer before the transistor power ampts input.This corrected the response differences, but did not alter the output impedance. 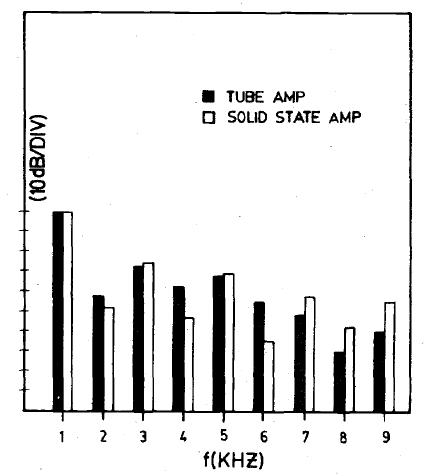 The next stage was a double blind listening test, using real guitarists. Double-blind means that during the test neither the guitar player or the investigator knew which amplifier the guitarist was playing through.

12 guitarists compared the power amp sections of the respective amplifiers. 4 couldn't hear any difference, 8 said they could hear a difference but only one of these players could reliably discriminate between the two amplifiers. A similar result was obtained when the amps were driven to distortion, only two players could reliably discriminate them, (due to a buzzing noise with the tube amp). When comparing the pre-amp sections of the amplifiers, none of the players could tell the difference. The same was found when comparing a complete tube system with a complete solid-state system.

In conclusion this study demonstrated that there are measurable differences between the tones produced by tube and solid state amplifiers. The tube amp has a characteristic gain and frequency response, but if this was controlled for the other differences between the amplifiers were too subtle to be noticed by players.  This study demonstrates a useful approach to the evaluation of guitar gear.

I would tend to agree wholeheartedly with the content of this article. As was proven in the blind study, I believe a large percentage of guitarists cannot distinguish between the two types. Of course, industry marketing and sponsorship/endorsement have a huge impact on the public. However, in my decades of playing, I've come to experience that there are both wonderful and also mediocre-to-crappy tube and solid-state amps. It is truly up to the ear of the individual player to determine which is more desirable. -EB

I know I'm commenting on an old article, but here it goes:

My favorite statement in this article: "the amplifier becomes part of the musical instrument". That is 100% true, you learn to play with the nuances and swells of your favorite am and respond to the guitar accordingly.  It's hard for me to accept the remainder of the science behind this test when it was not a comparison of two equally valued retail amplifiers.

Why would a custom preamp be used in the solid state unit? (I think I know the answer already). I'm sure with the right parts and the right price you can build a very nice SS amp that sounds great, hell I know you can.

A better comparison would be two $500 1x12 Combo's side by side, same cabinet, same speaker and try this test again. Then do the test even one more time without the soviet JJ's or GT tubes, grab a set of NOS RCA, GE or any other 50's -60's US made tubes for yet another comparison.

Personally I think in 1981 (when this test took place) CBS-Fender already knew that tubes were going away and needed some science to sell guitarists that SS sounds just as good.  While SS is leaps and bounds better today than ever before, when I needed a new home studio amp, I sat down in the guitar store and played a few. I then placed my order for an amp with tubes.

Whatever you pick, make sure you like the sound.